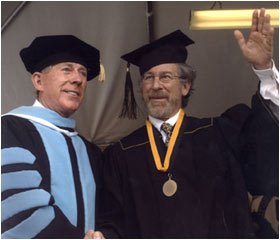 Should late work be assessed the same as work submitted on time?

Seems the famed Hollywood filmmaker never completed his degree in film studies at California State University at Long Beach. It bothered him for many years and so he re-enrolled and completed the necessary requirements to attain his degree. Spielberg’s culminating project? Oh, just some little film he made called Schindler’s List.

Can you imagine how Spielberg’s classmates felt?

“My film stars a plastic bag, floating in the wind. It’s a metaphor for the randomness of life.”

“My film stars Liam Neeson. And, it had a budget of 22 million dollars.”

Okay, I admit that this is a ridiculous example and may be just me engaging in Reductio Ad Absurdum (no, this is not a spell from Harry Potter). But, it does illustrate a very legitimate concern regarding the treatment of late student work.

Finding this 2002 Spielberg article was totally serendipitous as I had just started reading A Repair Kit for Grading by Ken O’Connor. One of the areas of concern for the author was the punitive practice of reducing marks for work that is submitted late by students. I agree with O’Connor that late penalties do not necessarily motivate students to hand work in on time, and they do not necessarily reflect “real world” practices. 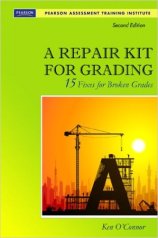 Nevertheless, I couldn’t get past the idea that work submitted on time vs. late work is like comparing apples and oranges. Submitting work beyond the due date may have a significant impact on the overall quality of the work. For instance, a student may complete a task in the assigned one-hour block. Another student hands in the same assignment a week or more later. Having additional time to think about, and execute, the project is a clear advantage for the latter later student. In addition, if the late work was completed out of the classroom and out of sight of the teacher, additional help from parents or tutors could have been utilized.

O’Connor says good assessment should be about comparing student performance to standards, not to other students. So, don’t compare the students or their work. Just grade each piece of work using your standards.

But, many standardized tests and activities (like IQ tests, etc.) include factors such as the amount of time needed to complete a task. If one student takes 2 minutes to complete a task and another student takes 30 minutes, something of note is happening and needs to be looked at. In the above example, Spielberg’s work was 33 years late. He had all that additional time to develop his own skills and collaborate with other skilled experts. He was a completely different student from the beginning of his academic program to the creation of his culminating task. Doesn’t that matter?

I understand that Spielberg’s situation is one-of-a-kind. None of us will have to wait that long for a student to submit a piece of work. But, there are students for whom we do wait. Like O’Connor says, it’s time we stop using grades to punish students, or as a stick to motivate them to submit work. But, maybe it’s time we built the concept of completion time into our rubrics.

What do you think? I would love to get some opinions on late work and the appropriate kinds of response to it. Should we disregard the amount of time taken to complete the work?

Teaching Without a Quill

Helping you embrace your inner tech